“The company “Slavonic Corps”, specializing in land and marine operations in the security area, seeks applicants among former employees of the Spetznaz (Soviet Special Ops), the Ministry of Defense or the Interior Army, having having the necessary training and experience in military action, for work abroad on business trips (3-6 months). Age: 24 to 45, depending on qualifications we may make exceptions. High pay level; depending on the test results and the tasks of pending mission. Please fill in the application at http://slavcorps.org or send to slavcorp.kadry@gmail.ru.. In case we are interested, a specialist will contact you. “

This recruitment ad, posted on May 6th 2013, can still be found on Russian websites.  The Slavonic Corp’s mission is simple:

“We provide services in the security domain on commercial and non-commercial basis…We use geared-up for patriotism Russian citizens, RF patriotic organizations and unions, and also Cossacks associations…We have a team of professionals with special training received during military seavice…can address problems of any sort that we receive from our Customers”

On 21 January 2014 Girkin is busy with promoting his first published book. The one with the ghosts and trolls and mystery murders. He entrusts the promotion to his old friend  –  Alexander Boroday,  owner of the PR agency SocioMaster.  SocioMaster, coincidentally, is also the the PR agency for Marshall Capital, and Boroday is the person who found the job at Marshall for Girkin in the first place.

Boroday has not always been a PR agent. He and Girkin became friends during the Transnistria war of secession in 1992, in which they bought fought (another person who fought alongside them was Olga Kuligina, the mercenary recuriter for Syria). In 1993, he, together with Olga were among the armed rebels trying to bring down President Yeltsin and to take over the Ostankino TV tower, during the October 3-4 constitution crisis.  In this TV interview, he proudly reminisces about his role in the events, hand in hand with leader of the fascist organization Russian National Unity Alexander Barkashov.  In this interview, Boroday and Olga K together remember their role in the attempted putsch, and remember fondly Girkin, who introduced them during the Trasnistrian war.


Boroday was also a political scientist, giving advice to Putin on how 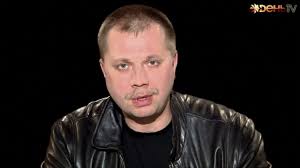 to improve his reputation.

Today Boroday is the Prime Minister of the Donetsk People’s Republic. And you remember Barkashov from the telephone instructions to the Donetsk referendum organizers.

Indeed, the “business trip” is paid for by Girkin’s boss. On January 22nd, Konstantin Malofeev arrived in Kiev as part of a delegation of the Russian Orthodox Church, which he generously sponsors, to deliver the Gift of the Magi to the Kiev diocese. Col. Girkin is in charge of the security of the Gift of the Magi.   The delegation includes also two high-ranking members of the ruling party in Russia, Dmitry Sablin and Oleg Lebedev; both are Afghan veterans. Sablin, member of the Duma’s national security council, was a vocal supporter of the Syrian regime who, during his visit to Kiev, naively and probably correctly, likened Yanukovich to Assad.

After his initial trip to Kiev, which lasted until February 2nd, and which the Ukrainian SBU is convinced served as an effective intelligence operation around Ukraine under the guise of “church visits”, Girkin wrote the following to his Ukrainian collector buddy:

During his trip to Kiev, Girkin was introduced to Igor Druz – the head of the Orthodox People’s Catherdral, an extreme anti-EU and pro-Russia organization which proselytizes to Ukrainians that if they join the EU, they will be forced to euthanize their children, as it happens in the Netherlands, apparently. Druz is one of the most vehement leaders of the Anti-maidan movement.

Upon Girkin’s return, Druz emails him links to a number of articles on the escalating tensions on the Maidan, as well as to an article about the irony, with which the Ukrainian Church accepted the “Gifts of the Magi” from Russia. One of the articles is written by Druz himself, and it argues that the Maidan must be forcibly closed down.

Girkin replies to this email:

“Please, let’s communicate on Skype instead: my colleagues do monitor it, of course, but yours have no access to it yet. I will be online after 14.00 our time and will wait for you to show up. Thank you for the information. I expect your comments on the list that I gave you!

With respect and hoping for a long and fruitful ooperation – Igor”

(Which reminds me of a true story, told to me by a retired Ukrainian ex-security boss, who once went to church to do a confession, and the priest approached him, turned pale, gave him a military salute and said apologetically: “I have been stationed here now…”)

We can’t be sure what “list” Girkin gave Druz. However, in a subsequent email, Girkin sends a list of 20 names and phone numbers in Ukraine. I have identified six of them as being Ukrainians of different professions but always of strong pro-Russian political stance, and often with extreme left, pro-Soviet political views; in my personal opinion – FSB sleepers.

On February 10, 2014, Girkin returns from his second business trip to Kiev. He writes to his new collaborator Druz:

“Today I returned from the trip. I didn’t come all the way to Kiev, that’s why I didn’t bother you. If I travel near Kiev the following week – I will call you. I read your article. If I manage – will circulate where possible.

But I believe that the “Maidan” should not be closed down. Why I believe so – I can tell you only in a personal meeting. By the way, I am not the only person who thinks so”

According to the SBU, during his second trip Girkin travelled to Crimea and Eastern Ukraine.

February 19th. One day before the Kiev sniper shootings that will change everything in Ukraine for ever. Girkin sends a pesky email to Druz:

“Where have you vanished? Homyakov cannot find you (we met with him yesterday). Make sure you show up on Skype today – my account is askoban6″

Homakyov is a fellow leader of the Orthodox People’s Cathedral and a president of the extreme nationalist “Grand Motherland Party”.  He is also a convicted racist.  In this public speech, Homakyov delivers an eulogy of “the kind patriot Muamar Gadhafi”.

We cannot be 100% sure where Girkin met Homyakov. However, we have evidence that in the following days, Homyakov was in Kiev, agitating against the Maidan movement.

What we also know for sure is that Girkin’s former direct boss, FSB Gen. Sergey Beseda, was in Kiev on February 20 and 21st. According to the Russian Foreign Ministry, his visit was to “ensure the safety of the Russian Embassy in Kiev”. This, however, seems odd given that his unit at the FSB – the 5th Department – has “near-abroad” intelligence functions, and given that he was met at the airport by Yanukovich’s SBU chief. According to Georgian sources, Beseda was also personally responsible for stirring up secessionist movements in South Ossetia in the 2008-2010 period, and furthermore engineered the coup in Georgia in 2010-2011.

We don’t know if Beseda and his former employee Girkin met during their overlapping trip in Kiev on February 20th. We do know, however, that a month later, Girkin will imply mysteriously and proudly, on a Russian online game forum, that he was behind the snipers shootings.

The remainder of Girkin’s story is familiar from my previous coverage. Despite his plans to join the recon in Moscow on February 22nd, Girkin never comes back to Russia. Instead he takes over the military supervision of the Crimean coup, with the ardent intelligence support of Druz, who sends him information on the movement of pro-Ukrainian demonstrators and later, troops.  He writes to his friends that he has become the military adviser to Aksenov, the Russian-installed Prime Minister of Crimea.

Girkin’s war-time buddy from the Transnistrian war Olga sends him alert emails about “leaks of our military information” to the pro-Ukrainian information service “Information Resistance”,  suggesting the continued involvement by Marat Musin’s “recruitment enterprise” in deploying Russian mercenaries to Ukraine.

But the most incriminating evidence of high-level Russian involvement in the invasion of Ukraine comes from this, now forgotten, recording of a phone call between Col. Girkin and a certain Moscow number, from 14.04.2014.

Moscow number: “Give me Strelok, urgently”

Girkin: “I salute you, Konstantin Valeryevich! We repelled the attack, with large casualties to them.”

Moscow number: “What exactly do you mean, with large casualties?”

Girkin: “They fell into our ambush. We shot out 3 VIP-class cars. We killed both the bodyguards and almost everyone inside”

Moscow number: “Did you report to Aksenov?” [the “Prime Minister” of the Crimean Republic]

Girkin: “Not yet, if you get a chance, please tell him”

Moscow number: “He is flying here tonight, I will tell him, but try to reach him and report him too”

Moscow number: “And about further reconnoitering…You do understand that the whole world is now focused on this location, so don’t be too smart in the future”

Girkin: “Roger, sir.  We have kept all positions, including in Kramatorsk. Konstantin Valeryevich, may I bother you to ask you, can you find out whom exactly we killed?”

Moscow Number: “I can only tell you their official info; that it was the head of the Anti-terorist Unit of Ukraine”

Girkin: “Did we really KILL him?”
Moscow number: “Well, [Interior Minister] Avakov says he has been wounded. So, you did great, hit exactly the right person”

Moscow number: “And last, I want to tell you that you celebrated today’s holiday in the perfect manner”

Girkin: Thank you!  I did my best” [both laughing].

The holiday on the day of the call was Palm Sunday.